Posted on October 4, 2015 by christopher fisher 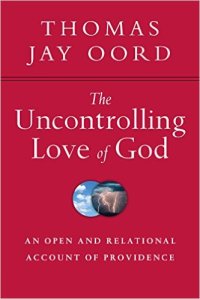 For believers, making sense of [evil events] requires belief in God. But the answers that most give to the question of God’s relation to randomness and evil leave me unconvinced and discontented. They don’t make sense. Believers need better responses than the usual fare.
– Thomas Oord, The Uncontrolling Love of God

Thomas J Oord is understandably unimpressed with the standard answers to the problem of evil. Evil, it is said, is part of God’s plan. Evil is used by God to teach people. Evil is the result of sinful people and God does not interfere in order to preserve freedom. Christians give all sorts of complicated and incomplete answers to the answer of evil, but evil remains a powerful argument from those wishing to reject God. Former Calvinist Bart Ehrman, a popular scholar and critic of Christianity, cites evil as the main reason he left Christianity. If evil can convert hardcore Calvinists into atheism, then what chance do the rest of us have?

In his first chapter, Oord details three such true stories of heartbreak, suffering, and random happenstance. I will add to it my own:

A day after my 31st birthday, we received a call about my six year old son. We had been trying to diagnose a lump on his neck. The doctors were not certain what it was, but on this day they were informing us about the results of a biopsy. It was cancer: T-Cell leukemia. For the next 6 months we spent week after endless week in the hospital. This six year old was poked and prodded. He lost his hair. They installed a port on his chest and in his stomach. They pumped endless toxins into his spinal column. Although he finally was placed in the medium risk category and fell into remission, his newfound friends at the hospital were not as lucky.

One child, struggling to stay alive, is now given a 20% chance of survival. This strong kid fights day and night, braving horrendous radiation treatments. He desperately clings to life against the odds. Although his odds of survival are slipping, he presses to do anything to live. Often these children die in spite of their pleas for life.

I lay awake at night in the children’s ward listening to the cries from adjacent rooms. The sound is maddening. Children are suffering through no fault of their own, day and night. Some are too young to comprehend what is happening. And this is a first world country. In other places and in other times, there was not medicine to dull the pain. There was no surgery to fix a broken body. There was no hope. Child mortality, until the modern world, hovered at about 50%.

Evil is real and critics of Christianity cannot just be easily dismissed with platitudes on this front. Where was God in all of this? Was this some sort of plan by God to teach some lesson?

Is the “lesson” they learned in death worth the evil they suffered? Can dead people mature?

Some evils are character destroying rather than character building. Many people have lives that are made far worse because of intense pain. They grow bitter, vengeful and tyrannical, making life hellish for others and themselves. The alleged divine strategy of improving personal character is often counterproductive.

Oord spends the first few chapters talking about randomness. He very well understands that events can be random but aggregates can be predictable. He also spends an appropriate amount of time dispelling the myth that any limitations on choice is a violation of free will. He states the most intuitive position on the matter: “The limited-but-genuine-freedom position says we freely choose among a limited number of options.”

This is what human beings experience. We cannot choose to jump to the moon, but most can choose to jump two feet into the air as opposed to one foot into the air. We choose what position to hold our arms during the jump or whether to allow physics to control their placement. Although our jump is limited by the extent of our strength, I would add that humans have available an infinite number of choices within set limitations. Even with limits, human beings have limitless options.

Oord starts with the common sense notion that whatever we experience should be our default understanding as to how the world works. If our daily experience is free choice (e.g. I choose between a Coke or some Lemonade to drink) then this should be our default metaphysical position. Fatalism should only be accepted if there is strong evidence to overcome our intuition (and claiming “intuition” is a result of fatalism is of no help to anyone). Oord acknowledges that the fatalists will always claim that there are underlying formulas influencing everything that happens (despite evidence of randomness on a subatomic level). If someone is devoted to fatalism, they can always claim that fatalism produces an appearance of randomness. How this is more rational than defaulting to randomness creating an appearance of randomness is anyone’s guess.

This proffered metaphysical model, admittedly, is of better fit than most current models although it shares with these other models the reimagining of ancient Jewish theology. In both Reformed metaphysics and in Oord’s metaphysics are God’s thoughts and actions stripped from the Biblical narrative (such as God’s destruction of the Earth to undo His regretted creation, or God’s laments that He has punished Israel continuously in vain). In this respect, Oord is similar to the Calvinist tradition. In other respects, Oord is superior to the Calvinist tradition (by not stripping God of His emotions, relational nature, and love). In both Oord’s metaphysics and Calvinism, God is powerless to stop evil (so there is not a power disparity). For this reason, I would classify Oord as more Theologically Biblical than even a Fundamentalist Calvinist. Both rework the Bible’s picture of God, Oord to a lesser extent.

Oord offers a metaphysics of “essential kenosis”. The idea is that God gives Himself into creation. Because the world is an extension of God’s love, God cannot unilaterally change creation. This would be God changing His own nature, which Oord says is impossible. Evil exists because God cannot stop it. But God can bilaterally change creation (differentiating Oord from Process Theology). This is Oord’s solution to a benevolent God coexisting with an evil world. Oord explains this more thoroughly than a review can do justice.

The book is engaging to read. There are insights on just about every front (from statistics to science to theology). The sources that are cited come from a wide variety of traditions. The flow of the text is, for the most part, smooth. The points are interwoven to make the most of their effect on the audience. Anyone interested in benevolence (or even Christological metaphysics) would do well to pick up this book.

If a reader is looking for a book on Biblical critical scholarship, this is probably not the book for them. If, instead, a reader is interested in a compelling and fair overview of a host of metaphysical models (proffering what it believes is the best metaphysical model which can be then applied to the Bible), this is a book they should not miss.

The blog is meant for educational/entertainment purposes. All material can be used and reproduced in any length for any purpose as long as I am cited as the source.
View all posts by christopher fisher →
This entry was posted in God, Open Theism, Theology. Bookmark the permalink.

2 Responses to Book Review: The Uncontrolling Love of God by Thomas J Oord