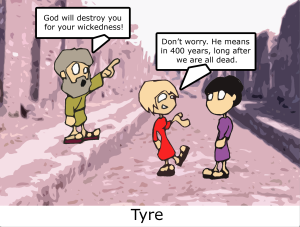 Sometimes the Skeptics are more honest than the Christians. Farrell Till explains, thoroughly, why the prophecy against Tyre cannot just be discounted as a prophecy about Alexander the Great based on a fleeting reference to “many nations”:

That brings us to the matter of the “many nations” that Ezekiel said would be involved in the destruction of Tyre. The literary organization of the prophecy (quoted above) seems rather simple. It began with an introductory statement of what Yahweh intended to do to Tyre. He said that he would (1) cause “many nations” to come against it, (2) destroy its walls, (3) break down its towers, (4) scrape the dust from it and make it like a bare rock, and (5) slay its “daughter villages” in the field. After describing in general terms what he was going to do to Tyre, Yahweh then proceeded to state the specifics of how this would be done: “For thus says the Lord GOD: I will bring against Tyre from the north King Nebuchadrezzar of Babylon….” It seems rather clear, then, that Yahweh was saying that Nebuchadnezzar would be the instrument that he would use to destroy Tyre as promised in the introductory statement, so he proceeded to state the specifics of what Nebuchadnezzar would do to Tyre. He would put Tyre’s daughter-towns in the country [the mainland villages] to the sword, he would set up a siege wall, he would cast up a ramp, etc., etc., etc. The prophecy listed a dozen specific military actions that “he” would direct against Tyre, and the only reasonable antecedent of the pronoun he is Nebuchadnezzar.

So if Ezekiel was declaring that Nebuchadnezzar would be the instrument that Yahweh would use to destroy Tyre, why did he say that “many nations” would be sent against it? A reasonable explanation of the prophet’s reference to “many-nations” can be found in the ethnic compositions of early empires. Empires like Babylonia formed from the conquest and annexation of surrounding tribes and nations, so when an area was assimilated into an adjoining kingdom, the soldiers of the conquered nations served the greater empire. The Assyrian empire, for example, crumbled when the combined forces of the Medes, Babylonians, and Scythians plundered Assur in 614 B. C. and Nineveh in 612. When Haran fell to these allied forces in 610 and then Carchemish in 605, most of the Assyrian territory was annexed by Babylon. In such cases, defeated armies swore allegiance to their conquerers, so the armies of a king like Nebuchadnezzar were actually armies of “many nations.”

Literally, then, when the armies of Nebuchadnezzar or Cyrus or Alexander attacked a city or territory, it wasn’t just the aggression of a single nation but of many nations. This reality of ancient warfare was reflected in a familiar scenario in the Old Testament in which biblical prophets and writers depicted battles against common enemies as the gathering of “many nations.” In 2 Chronicles 20:1-4, this allegedly happened when Jehoshaphat was king of Judah.

When inerrantists today look at Ezekiel’s prophecy through the glasses of historical records, they can clearly see that it was not fulfilled by Nebuchadnezzar, and so they must look for some way to explain away the failure. Ezekiel’s reference to “many nations” is a straw that some inerrantists like Brad Bromling have grabbed to try to salvage the prophecy, and so they have tried to make the prophecy mean that a series of attacks by many different nations spread out over 1900 years would result in the eventual destruction but that Ezekiel never meant that the total desolation of Tyre would be caused by Nebuchadnezzar. However, the literary organization of the prophetic passage (which I analyzed above) and the facts just noted about the multi-national composition of ancient armies like Nebuchadnezzar’s make this “explanation” questionable to say the least. It is more likely that Ezekiel meant that “many nations” under the leadership of Nebuchadnezzar would bring about the total destruction of Tyre.

The blog is meant for educational/entertainment purposes. All material can be used and reproduced in any length for any purpose as long as I am cited as the source.
View all posts by christopher fisher →
This entry was posted in Bible, Prophecy, Theology. Bookmark the permalink.

2 Responses to skeptics understand the failed prophecy of tyre