God does not have someone for you

Posted on March 7, 2014 by christopher fisher 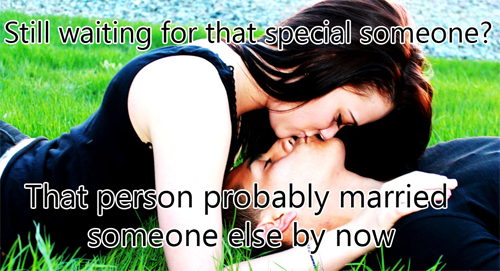 Christians are often embroiled with fatalism. I have heard entire sermons about how God has one special person planned for every single boy and girl. In addition to ruining the lives of countless Christians, this doctrine is not Biblical. The texts used to support this (just like Rebekah being picked for Issac) always tend to boarder on figures of speech or only show isolated instances for people that have special relationships with God. The Bible also has very strange instances in which odd things go on in marriages (such as Jacob marrying both Rachel and Leah). If the fatalist view was correct, some unlucky guy never got to marry the girl picked out for him OR two unlucky girls both paired with a guy for whom two wives were picked out. It gets weird. Fatalism is not Biblical.

The Bible does not hold this fatalistic approach to marriage:

Paul gives widows the liberty to remarriage whomever “she wishes” (1 Cor 7:39). Paul advises people not to marry at all (1Co 7:8). Jesus is confronted by a scenario where seven brothers married the same lady (Luk 20:29). This handing down of wives to surviving brothers was ubiquitous in the Jewish culture. Jesus allows divorce (Mat 5:32), and Paul allows divorce (1Co 7:15). And Paul also warns Christians not to marry unbelievers (2Co 6:14). In each of these cases, fatalism is not assumed into the text although this would have been the perfect place to add “by the way, God has your special person chosen for you”. The Bible treats marriage as open, where any number of people could be sufficient for a spouse.

This is illustrated in a post from The Art in Life:

Do you remember those awesome Evangelical 90’s/ early 2000’s where Jesus was kind of like our boyfriend and we all kissed dating good-bye because we just knew that God was going to bring us THE ONE and then life would be awesome? And THE ONE would most likely be a worship minister, or at the very least a youth pastor, and we would have to be in college when we would meet at some sort of rally to save children from disease or something. We would know that he was THE ONE because of his plethora of WWJD bracelets and because (duh) he had also kissed dating goodbye and was waiting for me, strumming Chris Tomlin songs on his guitar as he stared into whatever campfire was nearby. We would get married and it would be awesome FOREVER…

But then my theologian biblical scholar father shattered my dreams by informing me that God doesn’t have a husband for me, doesn’t have a plan for who I marry. NOT TRUE I scolded him, attacking him with the full force of Jeremiah 29:11 that God “knows the plans he has for me, plans to prosper me and not to harm me, plans to give me a hope and a future,” and obviously that means a hott Christian husband because God “delights in giving me the desires of my heart.” He slammed through my horrible (yet popular) biblical abuse by reminding me that the first verse applied to the people of Israel in regards to a specific time and just didn’t even dignify my horrible abuse of the second verse with a rebuttal. Nope, he said, a husband is not only not a biblical promise, it is also not a specific element of God’s “plan for my life.” God’s plan is for us to be made more holy, more like Christ… not marry a certain person.

And then he gave me some of the best relationship advice I ever got: There is no biblical basis to indicate that God has one soul mate for you to find and marry. You could have a great marriage with any number of compatible people. There is no ONE PERSON for you. But once you marry someone, that person becomes your one person.

Marriage involves a lot of work and compromise, and a certain disillusionment spawned by the discovery that the person one married was not created exclusively for one’s own pleasure is a certain result. So the message of “wait until you find your soul mate and then you can live happily ever after” has become, in my view, extremely harmful to the Evangelical church, leaving many disenchanted and jaded people in its wake, people who did not experience the joys of a perfect marriage and the rest of a “blessed life” the way they expected. (And that each party enters the marriage expecting the other to be “perfect for me” works out perfectly if we’re trying to create especially selfish expectations rather than the commitment and compromise foundational to a strong and lasting marriage.) The result? The same divorce rate in the church as in the rest of society, despite a stated contempt for divorce.

The blog is meant for educational/entertainment purposes. All material can be used and reproduced in any length for any purpose as long as I am cited as the source.
View all posts by christopher fisher →
This entry was posted in Human Nature, Theology. Bookmark the permalink.

3 Responses to God does not have someone for you